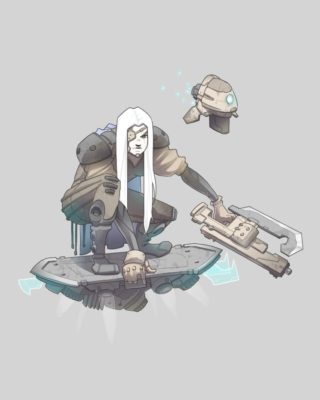 Hover boards saw several stages of evolution before the invasion.

Small, light, and affording it’s rider high speed and maneuverability they made for an ideal terrestrial rapid assault vehicle.

In early tests with blades mounted on the sides of the boards riders would slide across fields of grass, cutting wide swaths as they went. These bladed boards ended up being called Scythes. This lead to their riders being nicknamed Reapers of course. Later the physical blades were replaced with energy variants, lightening the boards, and increasing their effectiveness as weapons.

Shown: a female human Reaper on a long range board, with targeting implant and Sidekick drone.